MAS unit, EADS in engine maintenance JV - They will set up a world-class MRO facility next year

The tie-up is to establish a world-class PW100 series engine maintenance, repair and overhaul (MRO) facility in Malaysia. .

The facility is expected to be operational in 2010.

MAS executive director Tengku Azmil Zahruddin said details of the joint venture, such as investment cost and the respective party's equity stakes, were being studied. 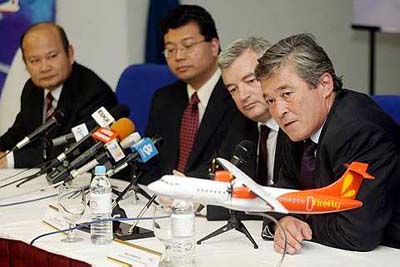 "We are still studying the details, it's too early to give numbers," he said after the signing of a memorandum of understanding between both parties here yesterday.

Despite the current economic condition, now was the best time for MAS to set up such a facility, Tengku Azmil said.

"By the time the economy recovers, we would have the facility in place and people trained," he noted.

The facility is positioned as a one-stop centre for engine, airframe and component support for PW100 series engines.

"This is a great opportunity for MAE to capture a fair size of the market. Currently, there are some 100 aircraft in the region equipped with the PW100 series engines and we expect the number to double to 200 by 2012," Tengku Azmil said.

He said aircraft equipped with the PW100 series engines include ATR, Bombardier Dash 8 and Fokker 50s.

MAS currently has a fleet of nine ATRs - three for MASwings and six for Firefly.

By the year-end, MASwings and Firefly will each have seven ATR aircraft.

It is an entity of EADS SOGERMA, a wholly-owned subsidiary of EADS Group, a global leader in aerospace, defence and related services.