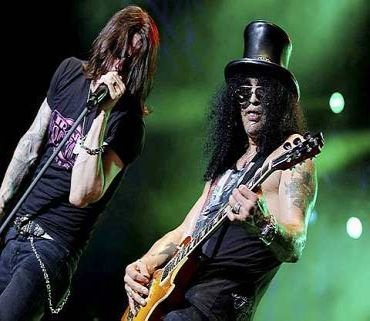 As the crowd started building up, the atmosphere got gloomier by the minute. It threatened to rain, and then the worst almost happened – little droplets of water started falling from the sky. But even if it had rained or if there was a thunderstorm, nothing could have dispersed the 7,000-strong crowd who were present at one of the most legendary concerts to ever hit our shores.

“I've never seen so many beautiful women in my life,” legendary guitarist and rocker, Saul 'Slash' Hudson said to screaming fans. The Guns N' Roses guitarist was at the Sunway Lagoon surf beach for what proved to be one of the best rock nights this country has seen for a long time.

Screams of “We want Slash” rang out through the crowd at the beginning of the hour-long concert that featured lead guitarist Slash, lead singer Myles Kennedy, Bobby Schneck on Rhythm guitar, Todd Kerns on Bass and drummer Bent Fitz. The energy was up to a fever pitch even before the end of the first number, Ghost. The amazing riffs and the truly surprising and wonderful vocals from Kennedy would have satisfied any self-respected rock fan. 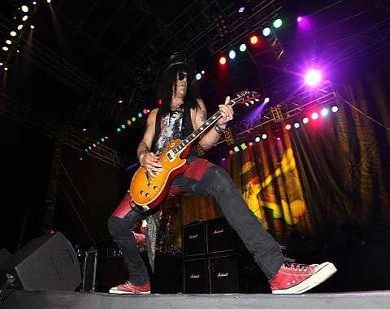 But of course the man of the hour was the rocker himself, Slash, who has already won over a swarm of fans from his Guns N' Roses days. Now the guitarist is branching out as a solo, producing his own album with his own band. His solo venture is proving to be a successful gamble as he sets out to write history all over again. And from the sampling he gave Malaysian fans Thursday night, Slash should be ready to sore to greater heights.

Even so, it would also be safe to say that Kennedy may have almost stolen the show when belting out melodious rock tunes that was pure magic. And when the band had stopped jamming for a few seconds to introduce themselves to the mesmerized crowd, wild screams erupted as Kennedy was introduced by Slash. A combination so perfect to drive even the most hard core rock fans to tears of joy.

The concert would not have been complete without familiar sounds from Slash's former band, Guns N' Roses' chart topping records such as Sweet Child Of Mine, Civil War and Paradise City. Sweet Child Of Mine brought out an even larger rush of energy within the crowd, with adoring fans jumping and singing along to the lyrics.

What would a concert be without the crowd whipping out their lighters? That time came when Kennedy sang Back From Cali, the third single from Slash's self-titled debut album. Kennedy's Starlight followed with the crowd singing along.

At the end of the night, with the crowd yelling “We want more!”, Slash and his traveling band performed Paradise City before leaving the stage and the still-screaming fans who are hoping for more such performances from other A-list singers.