Slashing his way to Malaysia

Former Guns N Roses lead guitarist Slash will be making his way to Malaysia on August 5th.
By MSN Entertainment, 6/17/2010 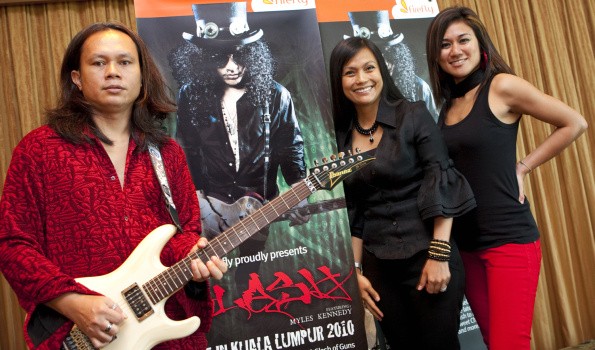 At the concert, fans can expect to see Slash performing tracks from his debut solo album and also other hits from Guns N Roses, such as “Sweet Child Of Mine" and “Paradise City”.

Ms Angelina Fernandez, FireFly's Head of Marketing and Communications, said: “It’s a privilege for Firefly to bring in a guitar legend like Slash to Malaysia. Slash transcends the age divide with kids as young as 18 to adults as old as 50 years old. His music is pure rock, going back to the time when music was just with drums, bass and guitar only. No rapping, no keyboards, just the classic rhythm section. I am sure that the performance will thrill all his fans and they can expect the concert to be a rocking good one.”

She added, “It’s been exciting to see Firefly spotlight on one of the most talented rock artists in the world. This concert will give Slash fans not just around the nation but those living in the region, the best opportunity to see their idolised entertainer performing live and simultaneously enjoy the many wonders of Malaysia.”

Tickets for the concert is already on sale with prices for early birds starting at RM93, and overall there are three levels of pricing: VIP – RM378; PS1 at RM253; PS2 at RM183. For more information, log on to www.fatdeal.com.my.