Slashed it and smashed it to pieces 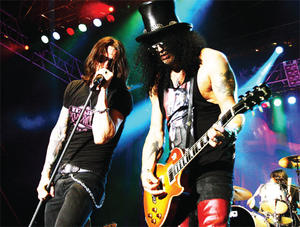 THE STAR: Slash stole the limelight from Kennedy many times as he thrilled fans with his world renowned guitar playing skills

Together with thousands of fans, the talented ex-guitarist of rock band Guns N' Roses rocked it out at the sandy concert venue, despite the threat of rain and sweltering heat.

Mat rocks, rock star wannabees and fans of good ol' fashioned rock music came by the droves to the highly anticipated rock concert. Many came as early as 6pm when doors opened, in hopes of finding the ultimate spot to catch their idol Slash showing off his skills alongside vocalist Myles Kennedy and his three band mates.

Presented by Firefly and Universal Music, the concert was hosted by radio announcers Phat Fabes (Fly FM) and Leya (Hot FM) who tried very hard to get the crowd psyched up for a night they would never forget.

The evening started with an energetic performance from local rock act Amy Search and his band, who got many in the crowd into the mood for rock. Singing songs from his illustrious career, Amy gave the audience doses of rock music throughout his half-hour act. His rendition of the timeless classic Isabella was the one song that got local rock fans to sing along too.

As soon as Amy and his band exited the stage, fans were impatiently screaming "We want Slash" between 20 minutes of sound checks and no action.

All that waiting proved to be worth it when Slash, together with lead vocalist Kennedy and his entourage emerged on stage. Wasting no time, the rockers started off the hour-long concert with the song Ghost which took the crowd into a frenzy.

Slash's incredible riffs together with Kennedy's soulful voice wove its magic to mesmerise fans from then onwards. The crowd whipped up their lighters for Back From Cali, the third single from Slash's self-titled debut album and sang along to Kennedy's own Starlight.

Not surprisingly, Slash stole the limelight from Kennedy many times as he thrilled fans with his world renowned guitar playing skills. 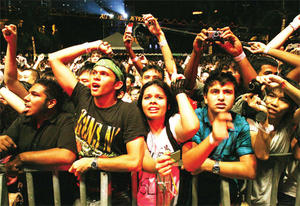 The crowd cheered him on as he engaged the young and young-at-heart with frenzied yet harmonic sounds in many songs including Night Train, the third song from Guns N' Roses 1987 debut album Appetite for Destruction.

Saul 'Slash' Hudson saved most of his energy to entertain the audience with his riffs, but took time out between songs to thank the crowd for coming up. "I've never seen so many f****** beautiful women in my life," said Slash, much to the delight of his female fans, who screamed their approval.

The constant shrieks from the audience as Slash and Kennedy played continuous music echoed the sizzling melodic chemistry with the two and the band, compromising of Bobby Schneck on rhythm guitar, Todd Kerns on bass and drummer Bent Fitz.

Singer-songwriter Kennedy's raw, spirited voice was a pleasure to listen to while his energetic performance across the stage got some audience to sing along while others indulged in a little head-banging.

The lead vocalist for hard rock band Alter Bridge also got screams as Slash introduced him to the crowd, proving they were as wild about Kennedy as they were for Slash, current guitarist for band Velvet Revolver.

There was no doubt that the swarm of Slash fans at the concert was thrilled when they performed Sweet Child of Mine half way through the evening. Together with Civil War and encore Paradise City, the crowd got their share of entertainment with generous doses of guitar riffs and reverberating rock numbers.

Man of the hour Slash gave Malaysians a sample of the future as he pursues his latest solo endeavour and rewrites his own musical history.

Judging from the electrifying performance he gave the crowd, Slash will have no troubles getting support from his old-time fans and capture the hearts of new ones. 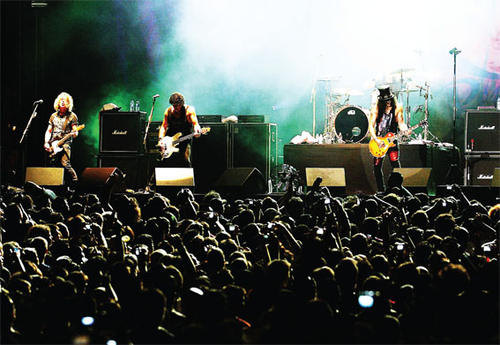 A few moments with the man

IT is all about work for Slash as the moment he touched down on Malaysian soil, he was whisked away for a Press conference before his concert.

"I'm just embarrassed that I haven't done anything. This is actually one of the premium spots in Asia that I would love to spend time in," he declared.

Unfortunately, Slash left after the concert but he promises that he would be back soon to visit as he's confident that this first gig of his in Malaysia would open the doors to him coming back again.

Fans of Slash might be aware that his first solo effort, self-titled album Slash is currently out and all things considered, this former guitarist of Guns N' Roses thought that it had been a pretty easy process finishing the project.

"There have been no unnecessary hassles with this album. I used to think that these hassles were part of rock and roll but it's not, really. You can have a really good time and it can be really easy to do."

Not only does he proudly proclaim that everyone is in this tour for the right reasons, but also that the band is getting better and better.

It would be a big disappointment to fans if Slash's current tour does not contain any songs from his Guns N' Roses or Velvet Revolver days.

While a few songs are included, the difference between the rendition, apparently doesn't differ all that much. Well, except for the lead singer, whom Slash has complete confidence in.

"The most noticeable difference is Myles Kennedy singing it. Myles sings it amazingly well but at the same time he manages to own them. The songs sound like what they sound but at the same time he sounds like himself. It's pretty seamless. So far, we've been touring for three months and everybody is amazed by it. They don't really stop and go 'That's not Axl' or criticise him.

"As for arrangements, we don't really hack the songs up for any kind of self indulgent means." 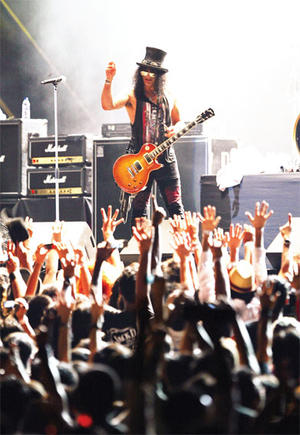 To name a few, Slash was contacted by Michael Jackson in 1990 to work on the album Dangerous. Since then, he has collaborated with Jackson on several occasions which included appearing on stage with Jackson during the Dangerous World Tour and playing the guitar on D.S. - a controversial song from the HIStory album.

Slash had also contributed some songs for the film soundtrack of Jackie Brown under the request of director, Quentin Tarantino.

Unlike previous clashes Slash has had with former bandmates such as Axl Rose from Guns N' Roses and Scott Weiland from Velvet Revolver, this particular experience Slash has right now is really positive and because things are going so well, he declares that whatever is different about it is all welcome.

However, Slash shared that despite the fallout his former Velvet Revolver bandmate had with the rest of the band, all is apparently quite well between the both of them.

"Scott Weiland and I, we're good. We (Velvet Revolvers) don't have the long term animosity with Scott, we didn't develop that. I think with Scott, it was too difficult to try and make things work with him. We all had a tumultuous five years in Velvet Revolver together, all having to do with a lot of outside influences, booze, drugs. It was a huge rollercoaster. At the end of the day, the chemistry between Scott and the rest of us wasn't that great.

"I like him a lot better not being in a band with him," Slash added with a laugh.