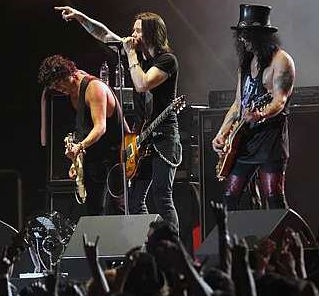 Now we know why Slash is a rock n' roll legend.

At the Sunway Lagoon Surf Beach, the venue for his historic Malaysian concert, the former Guns N' Roses lead guitarist was every bit of a guitar super hero he's hailed to be.

Technically adept yet beautifully soulful, Slash gave local Mat and Minah Rock (male and female rock fans) a taste of his gritty licks a la The Rolling Stones and Aerosmith.

It didn't matter whether he played his guitar upright or sideways, his skills were powerful and masterly.

Yes, his magical fingers will hypnotise you. 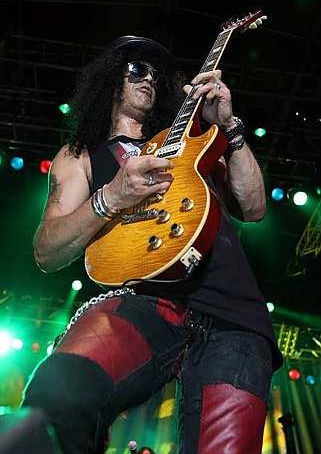 "Wa wa wa wa...," his electric guitar ferociously screamed on the choruses of Ghost and Back From Call, his latest songs from his eponymous solo debut.

He was having a ball too, chatting up the ladies in the audience. Slash said, "I've never seen so many beautiful women in my life."

Well, the ladies loved his bad boy persona. His hair 'exploded' from his head in cherubic curls as if they had never been cut since his Guns N' Roses and Velvet Revolver days.

And his trademark top hat sat firmly on his head - no matter how he (and his guitar) constantly swirled and spun.

What was missing was the ciggie dangling from his mouth, just like in his heyday. 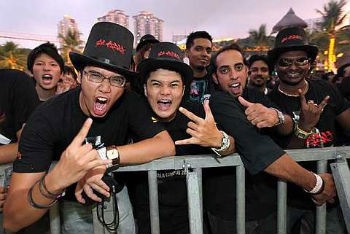 During a monumentally abrasive By The Sword, Slash knelt down, pointing heavenwards, as if seeking some sort of divine validation.

Even when they tried to bring down the temperature with a rock ballad, Starlight, the 5,000-strong audience found it hard to cool down.

"You guys are f**king awesome," Slash sang praises of his adoring fans, whose synchronised headbanging was a sight to behold throughout the one and a half hour set.

By the time the 45-year-old spat out his signature guitar swirls on the intro of Guns N' Roses classic, Sweet Child O' Mine, the crowd had already gone berserk.

Oh what a rock n' roll ecstasy the show was!