Guitarist Slash earned his stripes by paying homage to his heroes and in the process has become a hero himself.

FOR all the copycats, wannabes, has-beens and rejects that we’ve come to see or hear, it was gob-smackingly surreal to finally see that man, with that guitar, playing that solo.

Yes, we’re talking about Slash and his show-stopping rendition of Sweet Child O’ Mine in Malaysia last week.

Combine sheer talent and gift for having written or co-written some of the most memorable rock tunes, and the equation invariably ends with Slash.

He came, he saw and he most certainly conquered. Slash in concert at Surf Beach @ Sunway Lagoon (sponsored by FireFly), Petaling Jaya, Selangor, was as good a rock concert as this nation could possibly have witnessed. It was simply euphoric. Just ask anyone who was there – it wasn’t a figment of their imagination, either.

Truth be told, so much of the man’s appeal comes from a time when most of us were either growing up with Guns N’ Roses or growing hip to the band. 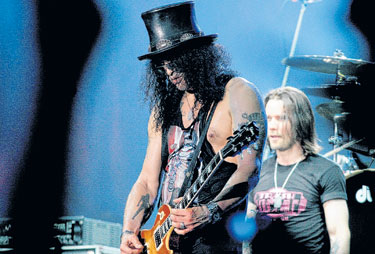 If Appetite For Destruction (1987) had come out when you were at an impressionable age, it could very well have turned out to be your favourite rock album, or at the very least, one of your favourites.

But Saul Hudson (Slash’s real name) is no nostalgic act. He was never stuck in 1987. Proof of that: the rockers and the rockers-at-heart that assembled at the Surf Beach came from all age groups and racial compositions, too.

It all began earlier that evening, with a short but rocking set by local hard rock outfit Blister, who set the tone nicely for the carnage that was to follow.

Our very own rock king, Amy of Search, did the nation proud with a typically killer set. He rocked and rolled, bringing out old war horses like Mentari Merah Di Ufuk Timur and Isabella. Semangat Malaysia was certainly in the air through Amy’s set.

Honestly, though, all the rock fans were there to sing their lungs out to at least a few Guns N’ Roses classics. Or to play air guitar, drums or just hum those unforgettable guitar solos. And the band didn’t disappoint.

Slash, with trademark top hat, and crew whipped up the crowd with the cranium-crunching Ghost, the opening track to the mop-haired guitar player’s recently released self-titled debut album. Lead singer Myles Kennedy (of Alter Bridge), although merely interpreting Ian Astbury’s studio version, sounded like he could deliver the goods.

Then came the first blast from the past. Nightrain would take any self-respecting fan straight back to 1987 because this was never a single, so you could only know it through the album, and chances are, you would’ve heard it then. The five musicians just “murdered” the audience with this. In fact, this band has been on fire with blistering sets in this region this month, with earlier shows in Jakarta, Hong Kong and Singapore gaining rave reviews (in the blogs to the mainstream media).

Slash has worked long and prolifically enough to have a large pool of material to pick from for a show. So, it was nice to see him dip his hand into the many different musical projects he’s been engaged in over the years – there were obviously the Guns N’ Roses gems, the Velvet Revolver tunes (Sucker Train Blues, Slither) and some from his new solo album.

While not every Slash fan went out to buy a Velvet Revolver album or even his latest, in a live context, everything sounded great. There simply didn’t seem to be one duff track at all.

Still, there was something magical about the Guns N’ Roses tunes. By The Sword, sung by Andrew Stockdale, was one of the few that rivalled the classics. So too Nothing To Say, which was vocally handled by M Shadows (of Avenge Sevenfold) on the album.

If there is one consistent complaint about Kennedy, it is that he tries really hard to sound like the original singers he’s covering. He could do with putting his own spin in certain areas, but maybe he doesn’t have a style distinctive enough.

The band was great. Brent Fitz on drums pounded hard but steadily, always keeping Slash and Dave Henning the bass player perfectly in the pocket of the groove. Rhythm guitarist Bobby Schneck learnt his Izzy Stradlin parts well and was the perfect foil to Slash’s guitar histrionics. And histrionics it was. No one can play a vertical guitar quite like Slash, let’s admit it.

Actually, no one could do it now without coming across like a peacock poser.

And for all the schmaltziness we’ve come to associate with Sweet Child O’ Mine, it is still one of the top 10 most recognisable rock songs in history.

Then there were the intense on-the-knees moments, eliciting squeals of feedback from his guitar, and of course, the one that really blew the crowd away – playing the guitar behind his head. Goodness, that’s Jimi’s trademark.

Therein lies the beauty of Slash’s story. He has become his heroes by doing what he does best. Why, he’s even a hero in computer games these days. And so much of those plaudits, he earned back in his Guns days. He had plenty of that to show too, for that night at Sunway Lagoon.

Rocket Queen was a mighty pleasant surprise and had the audience in full voice. Back then it was a damn good song but suddenly that night, it was a phenomenal rocker, replete with killer riffs, nifty sing-along and a sweet, sweet guitar solo. Civil War was an absolute scorcher, too. That guitar solo is entrenched in wah-wah guitar solo tutorials from here to Timbuktu.

When the band returned for the encore and began with Paradise City, we all knew the show was ending but Slash and his boys squeezed all the rock energy from every sinew of their bodies and put it all into that searing performance. That ending guitar solo has to be one of the most infectiously frenetic pieces of guitar work ever recorded, and that’s kind of what it sounded like on the night.

At the concert were the regulars of the entertainment industry – Faizal Tahir, Pop Shuvit, Bunkface and actress Sharifah Amani, to name a few. Among the commoners, there were the Slash banners and corny top hats, but it was all good fun.

But what on earth was going on with the logistics? The entrance process was so laborious and slow that a large portion of the audience missed the opening acts completely and the start of Slash’s set. When all was lost, the ushers merely waved everyone through without checking the tickets. Then there was the overcrowding issue. Many audience members were not allowed entry into their respective zones because those were packed to the hilt.

According to Wilson Teoh, director of show promoter TangeryneDream, the e-ticketing system and provision for the standing room didn’t work out the way it was envisioned. “We sincerely apologise to all the fans for this oversight and have taken steps to make sure this doesn’t happen again in our concert environment. Slash and his band had a flight to catch at 1.50am to Osaka, which is why all the acts were punctual. This is a lesson for us and we hope there will be no repeat of such an incident,” he said.

But at least the fans left knowing that this was probably the best rock concert that’s come to this country in a long while. If this is the first and last time Slash comes here, then years down the road, for those who where there, this will be one of those monumental rock moments that they have every right to trumpet, “I was there at the Slash concert”!