S P Setia and Firefly takes off together

By Wong King Wai of theedgeproperty.com 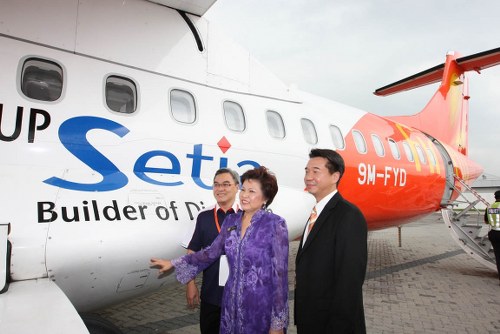 From left: Liew, Ng and Leong at the launch of S P Setia's new marketing campaign with Firefly

Liew, however, declined to say how much was spent on the campaign. He was speaking at the launch of the campaign officiated by Tourism Minister Datuk Seri Dr Ng Yen Yen on Wednesday March 31.

The branding campaign will last for one year and all seven Firefly aircraft will feature the S P Setia logo on their fuselage and in the cabin. Setia Today magazines and various advertising items publicising the developer's various products in the Klang Valley, Penang and Johor as well as projects in Vietnam will also be available in flight.

At the launch, the S P Setia logo branded on one of Firefly's ATR 72-500 twin turbo prop planes was unveiled on the tarmac of the Sultan Abdul Aziz Shah Airport in Subang beneath a slight drizzle.

Ng said the collaboration between Firefly and S P Setia fitted well with the launch of the New Economic Model (NEM) yesterday (March 30) where innovation plays a crucial role in Malaysia's future development.

As this is the first time that a Malaysian property developer has teamed up with an aviation company, managing director of FlyFirefly Sdn Bhd Datuk Eddy Leong believes the collaboration will benefit both parties. He expects to see a 20% contribution from aircraft advertising to net profit this year.

Leong shared that since Firefly is a new company, it wanted to leverage on a strong brand to promote itself. S P Setia suited the bill nicely, he said.