IPOH: The new Perak Mentri Besar has been sworn in but it was business as usual for the former Pakatan Rakyat state government.

Nizar said the special meeting, among others, approved the extension of land lease for industrial plots from the current 30 or 60 years to 99 years.

The state government, Nizar said, also approved the appointment of 342 councillors for the 15 local councils in the state.

The Sultan Azlan Shah Airport here would also be revived with low-cost carrier Firefly flying here from May 15, he added. 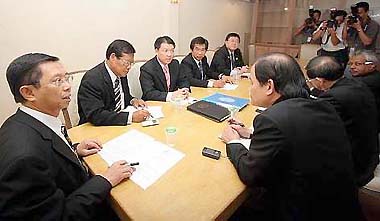 "The state is paying RM2.7mil to Firefly as contribution to the carrier for flying to Ipoh," he said, adding that the carrier would be flying to Singapore and Subang.

To a question, Nizar said there would be no problems in implementing the decisions passed at the special meeting.

"The state agencies have to concede to the government of the day and the question of their not implementing the decisions does not arise," he said, adding that the minutes of yesterday's meeting would be sent to the respective departments for implementation.

On the swearing-in of Barisan Nasional exco members on Tuesday, Nizar said that Barisan should wait for the High Court's declaration on the matter.

"If they go ahead and swear in the exco members, we will be the only government in the world with two Mentris Besar."

"I will still report for work on Tuesday as Tuesday is our meet-the-clients day," he added.