PENANG needs at least 200 to 300 new hotel rooms a year even if its economic growth stays below 5% per annum as a result of the global recession, says the Malaysian Association of Hotels (MAH), Penang chapter, chairman Marco Battistotti.

Assuming the state's economy annually expands by 5%, which was last year's record, there is a need for 300 to 400 rooms.

"New hotel projects that have been approved should be allowed to carry on so long as they are in accordance with the law," Battistoti added. 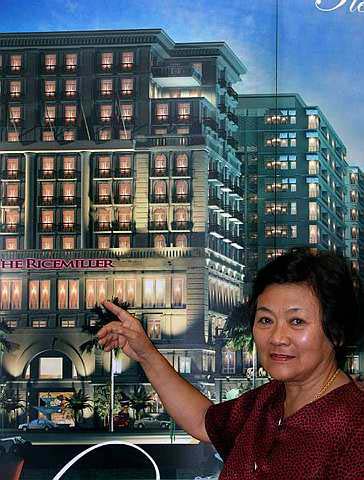 "The Penang hotels' occupancy rate for the first three months of 2009 was about 60%, compared with about 64% in the same period a year ago," Battistoti said, adding that the hotel rates were competitive compared with prices in Bali, Bangkok and Singapore.

"The daily room rates in these destinations have risen by about 20% and 25% since last year.

"Presently, the average room rate in Singapore is about S$180, while in Bangkok and Bali, they are US$75 and US$94 respectively," he said.

Penang is attractive as a tourist destination not only because of its competitive room rate pricing.

"The strength lies in Penang's balanced mixture of beach and city hotels. It has 35 hotels, of which 22 are in the city and 13 are beach resort hotels.

Due to the global recession this year, the MAH expected about 7% drop in tourist arrivals for Penang, Battistoti added.

"The presence of low-cost carriers such as Firefly has helped increase tourist arrivals in Penang from other states in the country and the region.

"Some 20 years ago in Europe when low-cost carriers first appeared, travel within the European continent also doubled,"he said.

On the four approved hotel projects for inner George Town that hit a snag following the 18m height restriction guideline in the state heritage dossier, Battistoti said the MAH supported the projects.

The Eastern & Oriental Group obtained building plans approval from the Penang Island Municipal Council (MPPP) in 1996 for its 28-storey Annexe.

However, it was scaled down to 15 storeys in 2008 when the 18m height restriction was imposed. The Boustead and the AGB Groups received MPPP endorsement for their projects in 2007 while the Low Yat Group's proposed project received the go-ahead in late June 2008, less than two weeks before George Town was declared a World Heritage Site on July 7.

Because of the controversial height guideline, the developers of the four projects have now taken a different stand on their projects.

AGB has yet to receive the go-ahead from the local authorities to commence building.

"We are puzzled because the MPPP's planning approval was given for a building 51.7m high.

"The financing was also obtained for a project with this height. How is it possible to change the financing model now?"she said.

Complying with the advice would cause the project to lose 70% of its gross commercial area, effectively rendering the whole project commercially unviable, Lim said.

"If we cannot proceed as planned, we will have to seek legal redress," she said.

A source familiar with the Boustead project said the group would carry on work as it had already received the go ahead to start construction from the MPPP.

"To stop work now would mean compensating the sub-contractors and that is a step that the Group don't want to take,"the source said.

E&O communication and investor relations director Lyn Chai said the group had recently stopped work and would await clarification from the relevant authorities expected in June.

"When the Unesco height restrictions came to the forefront recently, we decided it would be in the best interests of George Town and consistent with E&O Hotel's unique position as a heritage hotel, to review our plans and await formal notification," she added.

When contacted, a Low Yat Group spokesman said the group, which had invested in Penang since the 1960s, would continue to co-operate and work with the relevant authorities to bring progress to the state and to uphold the Unesco world heritage site status.

"There are no immediate plans to make changes to the development order that has been approved," he added.