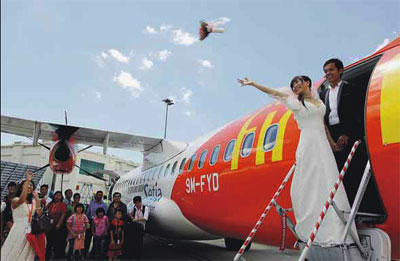 Goh Hwey Peng tossing the wedding bouquet from a Firefly plane at the Sultan Ismail Petra Airport in Pengkalan Chepa yesterday. Beside her is bridegroom Chua Siong Ooi.

While others might opt for luxury vehicles such as Mercedes Benz, the couple, both 26, and their entourage of 70 family members and friends took a Firefly flight from Kuala Lumpur for the occasion.

Asked why they opted for a flight, Chua, a civil engineer, said they wanted a grand and memorable wedding.

He said he met Goh, a beauty therapist, 18 months ago when he was helping a friend move house.

"It was love at first sight for both of us. She has a beautiful personality and it was this that attracted me," he said at the Sultan Ismail Petra Airport, Pengkalan Chepa here.

Several cars and a bus were on hand at the airport to fetch the group. Chua's family, who own a business here, held the wedding dinner at a major hotel last night.

Earlier in Kuala Lumpur, the couple were given a grand send-off by Firefly staff at the Subang airport.

Firefly's head of marketing and communications, Angelina Fernandez, said: "Firefly's staff meticulously planned every detail for this event, including a photo shoot and a multi-tiered wedding cake.

"As this is the first wedding reception being held here, we gave the couple a surprise gift of two return flight tickets for a honeymoon in Hong Kong on Malaysia Airlines, together with gift vouchers and hotel stay in Kota Baru."

She said Firefly, which had five daily flights from Kuala Lumpur to Kota Baru, had so far conducted 10 such wedding packages to various destinations, including Koh Samui in Thailand.

She added that couples who planned for a memorable wedding could contact Firefly.