Fly away for a holiday

VISITORS to the Star Education Fair 2009 this weekend will stand a chance to win free flight tickets to various tourist destinations locally and abroad through the Spin and Win contest.

Its communications and marketing head Angelina Fernandez said the airline was a big supporter of the fair as this was not the first time they were participating in it.

"Our purpose is mainly to encourage the public to travel to various destinations in Malaysia from Penang," she said.

Fernandez said Firefly would be offering special promotions to visitors during the fair under its 'Totally Un-Fare' promotion.

Last December, Firefly sponsored a group of students from a local university on an educational trip to Banda Acheh in support of the students' efforts to help tsunami victims.

To take part in the contest, The Star regional circulation manager Oun Sui Leng said participants should look out for the entry forms that would be published in The Star newspaper several days prior to the fair.

"Each entry form will be entitled to two spins," she said after receiving the flight tickets from Firefly Penang hub manager Audrey Yu. 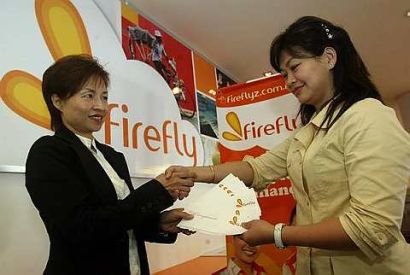