Firefly’s jet image - with a twist of heritage

Firefly’s jet image - with a twist of heritage

Shah Alam: Firefly, Your Community Airline presented a grandiose evening of houte couture in conjunction with design house Jendela KL, at the Holiday Inn Kuala Lumpur, Glenmarie today. This fashion extravaganza was held to showcase and introduce Firefly’s new range of attire for its cabin-crew and ground operation personnel to herald the commencement of its Boeing 737-800 jet aircraft services to Kuching and Kota Kinabalu on the 15th of January 2011. 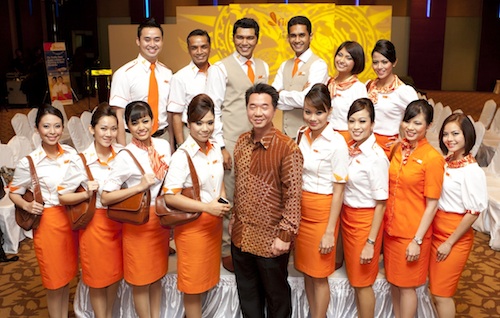 Head of Marketing and Communications, Ms Angelina Fernandez said, “Our collaboration with Jendela KL allowed us to reach into our colourful batik heritage to create an exciting and vibrant new image which further reflects our personality as ‘Your Community Airline’. We proudly showcase our traditional batik art-form which has been incorporated into a unique design theme. Our challenges were to carefully select materials that are durable for heavy-duty wear and yet ensure comfort and flexibility for our personnel to effectively conduct their duties, be it in-the-air or on-the-ground, while always being mindful of our Asian cultural dressing values. The final result is a range of attire that projects authority, efficiency and service readiness. As I’m sure you have witnessed today our ladies exude femininity while our men look very sharp indeed.” 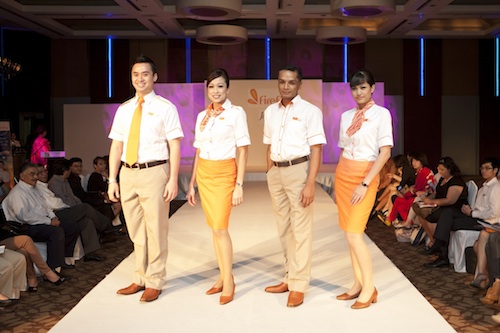 Firefly’s new jet image - presenting male crew on board for the first time.

Designer and Chief-Executive-Officer of Jendela KL, Faisol Abdullah claimed that it was an interesting exercise for him and his team to develop the new look for Firefly. The feedback and ideas from Firefly’s management, cabin crew and operational staff were taken into consideration in creating this design theme and our artistic flare completed the picture. 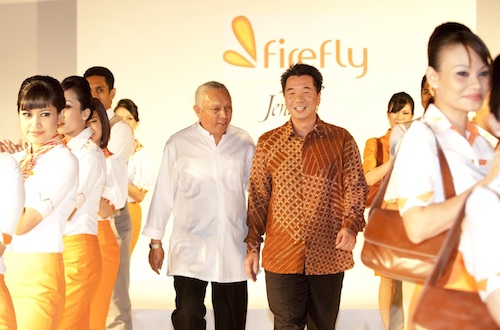 Leong & Abdullah making ‘the’ walk at the finale line-up.

The show was abuzz with professional models and Firefly staff who were parading Firefly’s current ATR crew attire, followed by the new ground crew outfits and the finale being the new cabin crew attire to be introduced onboard the Boeing 737-800 jets. Jendela KL also took this opportunity to showcase its other designs of sophisticated high-end quality outfits and accessories, using distinctive motifs quintessential to Malaysia’s heritage and culture. This particular range on show tonight was a prelude to the development of Firefly’s final design theme. 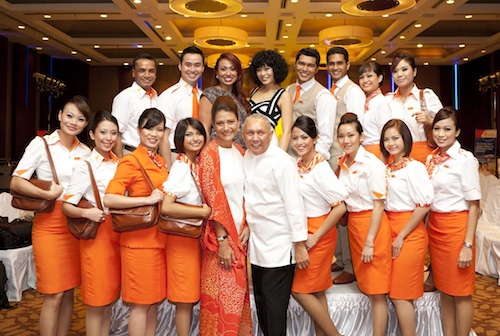 Hosting the event was former Miss Malaysia/Universe and senior radio presenter Datuk’ Yasmin Yussoff, ‘The Voice’ of Firefly Tunes on-board all aircraft, who captured the audience with her captivating style and manner. Adding additional spark to the event were Malaysia’s renowned diva Ning Baizura and Xandra Ooi, TV host and producer, who both made a special appearance.

Incorporated in Malaysia in October 2001, Jendela Batik began as the late Tun Endon’s platform to bring batik to the world. In 2009, present CEO Faisol Abdullah and his dedicated team continue to actualise the mission to build an internationally competitive Malaysian brand. Luxury living and image-conscious lifestyles call for exclusivity. Jendela Living focuses on eclectic, design and culture driven products targeting middle to upper income groups that are well travelled and socially conscious. Customers can choose from fabulous range of lifestyle products and accessories – such as sumptuous upholsteries, fine furnishings and richly decorated flatware to professional design consultation and ID services, offering the promise of a sophisticated living experience to the discerning decorator. Jendela Textiles carries an exquisite range of fabrics under the Asli, Ikat Celup, Colours, Nature, and Contemporary ranges, promoting the re-interpretation of Malaysian Batik to local and urban audiences by producing imaginative batik designs through dedicated craftsmanship.