PETALING JAYA: Firefly's debut on the Kuala Lumpur-Singapore airspace is set to spice up the market as it will be the only carrier flying from Subang to Singapore beginning July 1 while the rest of the pack flies the route from KL International Airport and the Low-Cost Carrier Terminal (LCCT).

Flying from Subang has been a dream for many passengers from the logistic perspective and some experts believe Firefly will be able to grab a slice of the market share from the other players even though Firefly's managing director Eddie Leong was modest in saying that "we are doing it more to complete our network rather than compete." .

For a start, Firefly is offering one-way fares from RM88 to Singapore and for the first two weeks of the month, it will have three daily flights 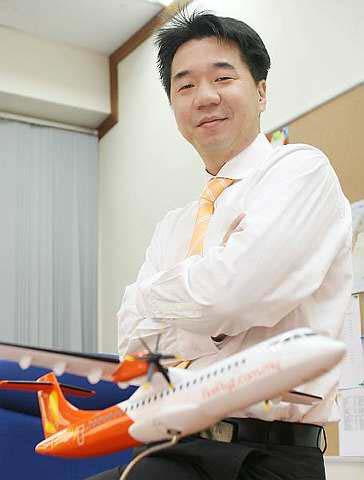 Eddie Leong - We are doing it more to complete our network rather than compete.

The frequency will be increased to four daily flights, totalling 280 seats. This is possible after Firefly takes delivery of its seventh turboprop in the last week of June. A turboprop can seat 70 passengers.

"We are more interested in the secondary points such as Ipoh, Kuala Terengganu and Kota Baru to the republic even though the Subang-Singapore sector is important as it will serve the needs of our business passengers," he told StarBiz.

At the end of this week, the airline will begin aggressively marketing the new Subang-Singapore route. It is also in the midst of finalising ground handling arrangements for its landing in the republic.

"Even without much publicity, we have managed to get some bookings and are hopeful of getting more once we begin our advertising (blitz)," Leong added.

The KL-Singapore route was a duopoly enjoyed by MAS and Singapore Airlines (SIA) before it was liberalised. Now more carriers ply the once lucrative route and Firefly's entry is expected to give passengers an alternative, that is flying from Subang instead of KLIA and LCCT.

"To remain in the game, even the full-service carriers will have to drop fares further to keep their market share at a time when demand for air travel is falling," said an industry expert.

MAS last weekend offered specials at RM9 one way excluding taxes and other fees for travel this year and zero fare for travel next year for the KL-Singapore route. "We will roll out more of such promotions and our lowest all-inclusive return fare currently on a MAS-operated flight is from RM353 for economy class travel," MAS senior general manager for sales Datuk Bernard Francis said.

But Leong is of the view that fares are already low and he does not think Firefly is a threat to the other carriers given its capacity constraints.

"The prices may be pretty cheap now but the market responds to promotions and anything is possible," Tiger Airways head of communications Matt Hobbs said.

But not to worry, he said. "The market is big enough for all the players."