DUE to increasing demand from passengers, Firefly has decided to open its latest ticketing office at the Terminal 3 in Subang.

The office, which was opened by Firefly Sdn Bhd's managing director Eddy Leong on Thursday, will offer more options for travellers especially those flying from Subang.

"They can obtain the tickets from the terminal office and board the flight to their intended destination," he said in his speech at the launch of the office. 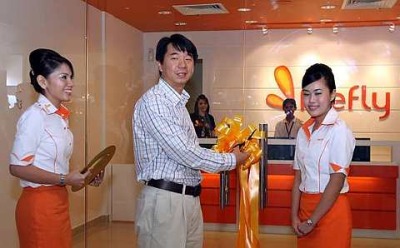 We are in business: Leong cutting the ribbon to mark the opening of the office.

He added that more ticketing offices would also be opened in Kuala Terengganu, Kota Baru and Kuantan in the near future.

Leong said the office, located on the ground floor of the terminal, would be open between 5.30am and 9pm daily.

According to Leong, beside the ticketing office, there is also a passenger lounge for frequent travellers.

Leong said they also expected the number of passengers flying with Firefly to increase this year.

Compared with last year's 400,000 passengers, he said, they expected 1.4mil people to use its service this year.

"We are confident that the target will be met since our travellers are mainly businessmen," said Leong.

Leong added that they had also applied to offer flights to Singapore.

He said they were looking at flying to Singapore from various points such as Subang, Ipoh, Penang and Malacca.

"In this way, we can help to promote the various interesting tourist spots to the Singaporeans who will have the chance to fly directly to their destinations," he said.