Sepang: Firefly, Your Community Airline, celebrated its new Kuala Lumpur-Kota Kinabalu route today at the Main Terminal Building, KL International Airport with an air of festivity as Firefly staff handed out mystery gifts to anyone in the departure hall who had the color orange on the outfits they were wearing.

To kick-start the celebrations, Firefly’s Head of Marketing & Communications led a team of Firefly staff to send off flight FY514 which included the event celebration guests; members of the digital and print media, local and international press; Miss Tourism Malaysia Queen International 2009 -Miss Cassandra Patrick, Chairman of Malaysia Airlines - Tan Sri Dr. Munir Majid, Managing Director of Firefly - Dato’ Eddy Leong and of course paying passengers. During the flight, limited edition postcards and stamps to mark Firefly’s new fleet of aircraft Boeing 737-800 were also handed out to passengers as keepsakes of the celebrations. At 3.50pm FY514 landed as scheduled at Terminal 1 of Kota Kinabalu International Airport to a warm welcome that included a water spraying guard-of-honour, upon touchdown.

On the tarmac to greet the flight were the Chief Minister of Sabah -Datuk Seri Musa Haji Aman, and Minister of Tourism, Environment & Culture - Datuk Masidi Manjun, who welcomed passengers with garlands and Firefly goodie bags. 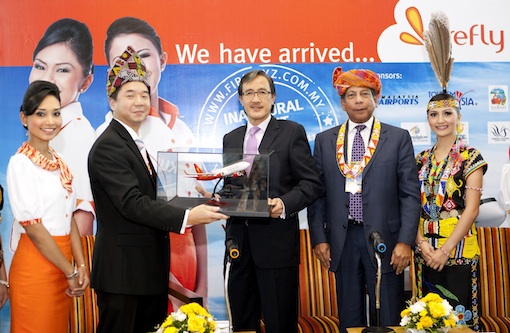 Firefly celebrated its entrance into Sabah today, 24 January, to mark the introduction of an additional third daily flight to between Kuala Lumpur and Kota Kinabalu with seats priced at the lowest fares. To enjoy these lowest fares, passengers would have to book their seats early.

According to Dato’ Eddy Leong, the business strategy of offering incredible value at lowest fares is to penetrate the value-conscious market, which is more price-sensitive: “Since Firefly began operations more than three years ago, business and leisure travellers alike have enjoyed flying on our ATR aircraft across the region. Now, Firefly’s customers will be able to enjoy the same level of booking convenience, comfort and superior service at low fares on the Boeing 737-800 aircraft. The low fares signify our commitment to serve discerning passengers who want good value for their money.

“Additionally, our three daily flights and codeshare agreement with Malaysia Airlines will complement and enhance our parent company’s current connectivity into Kota Kinabalu. We’re able to do this because of our incredible value with low fares and our high service level that MAS passengers are accustomed to from the full-service airlines. Now, both the cost-conscious and premium traveller will have a wholesome network and a wider choice with Firefly.”

This sentiment is echoed by Tan Sri Dr. Munir Majid, Chairman of Malaysia Airlines: “Firefly’s jet operations is positioned to meet the growing market of the low cost or value-conscious consumer preference model, supporting and strengthening Malaysia Airlines’ continuous development of its ‘hub-and-spoke’ to improve traffic flow. At the heart of it, Firefly plays a key role in complementing Malaysia Airlines’ overall network, and helping the Group as a whole explore new business opportunities.”

Firefly is able to offer low fares because of the savings in operational costs it enjoys. “We leverage on our parent company Malaysia Airlines’ experience, infrastructure and core services such as ground operations and MRO (Maintenance, Repair and Overhaul) while the financial strengths and credit facilities enjoyed by MAS also brings benefits to Firefly. All the savings in operating costs derived from these benefits are passed back directly to the customer in the form of the lowest fares,” explains Leong.

Additionally there are plans to open another five airport ticketing offices to support its expansion plans. We will also continue to work closely with travel agents to ensure more travellers get the opportunity to experience incredible value with Firefly. In 2010, Firefly flew 1.35 million passengers and it is projected to fly three million passengers in 2011 with the introduction of the Boeing 737-800 fleet together with an increase in the ATR fleet to 10 aircraft.