SUBANG: FlyFirefly Sdn Bhd, the wholly-owned subsidiary of Malaysia Airlines (MAS), is expected to commence its Singapore flights on July 1.

Its marketing and communication head Angelina Fernandez said the airline would start with three daily flights to the republic. 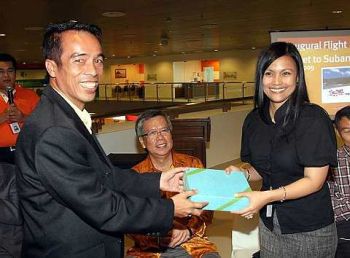 First flight take off: Fernandez (right) receiving a token from Chairat after Firefly launched its inaugural Subang-Phuket flight on Friday.

"After two weeks, we will fly four times a day to Singapore," she said after the airline launched its inaugural flight from Subang to Phuket yesterday.

Fernandez said the airline was also looking at new destinations in southern Thailand.

"We are targeting Hua Hin and Krabi," she said. Fernandez said she believed the Subang-Phuket route would be as popular as the airline's Penang-Phuket route, which began operations in 2007.

"With the convenience of our airport in Subang, getting around within the Klang Valley will save time and cost," she added.

Those on board the first flight on Friday were Patong's Deputy Mayor Chairat Sukban and Tourism Malaysia's Bangkok and Thailand sector director Iskanda Mirza Mohd Yusof.

"The Subang to Phuket route will increase accessibility between the two countries," said Iskanda Mirza.

"Every month, 110,000 Thai tourists come to Malaysia. Southern Thais like to travel to Malaysia because it is affordable and near," he added.

On another matter, Fernandez said the influenza A(H1NI) outbreak had not affected its flights.