Target is achievable due to stronger economy, says MD

SEPANG: Fly Firefly Sdn Bhd, a unit of Malaysia Airlines, which will begin its operations at KL International Airport (KLIA) on Jan 15, aims to fly one million passengers in and out of the airport this year.

Managing director Datuk Eddy Leong said the target was achievable as this year would be an interesting year for the company; there was a clear sign of economic recovery, compared to last year when things were a bit dicey.

“Apart from that, our newly launched airport ticketing counter at the main terminal building of KLIA will help to reach the growth target and, at the same time, to better serve and offer greater convenience to passengers,” he said yesterday after the opening of the counter.

Leong said opening a ticket counter was in line with its decision to base its new Boeing 737-800 operations at KLIA and would focus on offering unbeatable value at the lowest fares. 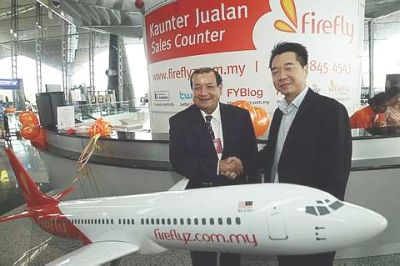 “This is made possible with our decision to use the Boeing 737-800 aircraft, with a capacity of 189 seats, which has allowed us to achieve among the lowest costs of available seat per kilometre among our competitors,” he said.

He also said passenger growth at the Skypark Terminal in Subang was expected to surpass two million this year after growing to 1.5 million last year.

He said the group planned to expand its services around this region in the third quarter of next year.

“Obviously, Asean will be the main focus for us and we are looking at it very carefully as we are now going through slot approvals,” he said, but did not disclose the specific cities Firefly planned to fly to.

Firefly would begin its operations in KLIA on Jan 15 to Kuching and Kota Kinabalu twice daily and, from Jan 24, four times daily and three times daily respectively.

Firefly's new airport ticketing counter opens from 8.30am to 5.30pm and sells tickets for all Firefly routes, add-on products such as in-flight meals, check-in baggage allowances and standard and premium sets of services. Come Jan 15, the counter's operating hours would be from 5.30am to 10pm.