SUBANG: Firefly has submitted an application to the authorities for traffic rights to mount flights from several points in Peninsular Malaysia to Singapore.

The airline is hoping to get the nod before April. 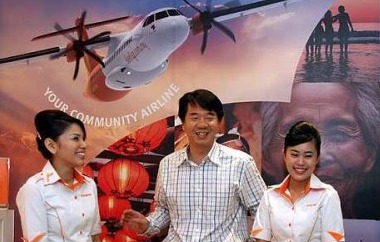 Eddy Leong and Firefly staff at the ticketing office launch.

"We have submitted our application but it is subject to approval by the Transport Ministry," managing director Eddy Leong said after officiating the opening of its ticketing office at Terminal 3 in Subang yesterday.

He said the mounting of flights to Singapore was part of the Asean Open Skies policy that allows Asean carriers as many flights as they want between capital cities.

With the additional flights to Singapore and other destinations that Firefly has planned for this year, the airline will increase the number of destinations it serves from 17 currently to 36 by end-2009.

Sources said other Firefly destinations this year included flights originating from Subang to Alor Setar, Jambi, Padang, Palembang, Pangkal Pinang, Bengkulu, Batam, Kuantan, Ipoh and Phuket. From Penang, it would be Huahin and Krabi, and even the Ipoh-Singapore route was on the charts, they said.

The airline, which operates five turboprops currently and will take delivery of another five this year, is confident of flying 1.4 million passengers in 2009 from 400,000 last year. A turboprop can seat 72 passengers.

The airline would remain a point-to-point carrier and would also be profitable this year, "otherwise we would have to class the business," he said. This is despite the fact that air travel is slowing down and people are more price conscious.

Leong said that even in an economic slowdown, there were people who wanted to travel and he believed Firefly offered very good fares, noting that the airline had done away with its fuel surcharge.

When asked how low could fares go, he said: "Our fares are very reasonable and if you buy early, you can get very low fares of even RM35 one-way. But you have to book one month ahead."

His advice was one should plan ahead. "Our European travel agents are already making bookings for October/November flights," he said, adding that the booking season was until October.

Leong said the airline's load factor averaged 60% currently but next week, it should rise to 99% due to the festive season.

Turning to the new office at Subang, he said Firefly intended to open more ticketing offices in Kuala Terengganu, Kuantan, Kota Baru and even Langkawi.

It now has offices in Penang, Johor Baru and points in Indonesia and Thailand.