IT was not all serious business at the Star Education Fair 2009 held over the weekend at the Penang International Sports Arena (PISA) in Relau as fun was also on the agenda via games and interesting demonstrations.

Over 25,000 people flocked to the annual event. It was the biggest turnout in the the fair's nine-year history.

A total of 119 exhibitors taking up 229 booths filled the main arena and concourse with striking and colourful displays. On hand were brochures and complementary stationery. 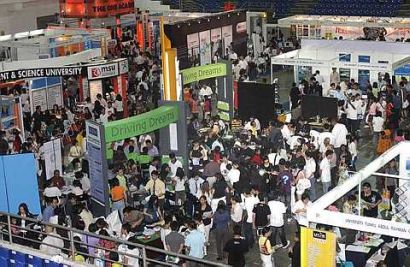 Overwhelming response: The huge crowd on the first day of the Star Education Fair at PISA visiting the booths for information.

Among the most eye-catching booths in the main arena was Singapore Educations' bright green setup showcasing 14 Singaporean educational institutions side by side which offered educational packages from primary to tertiary education.

Also captivating were Dasein Academy of Art's booths which had colourful graphic-design drawings.

KDU College Penang was a favourite spot as students from the School of Hotel Tourism and Culinary Arts offered mouthwatering delights like smoked salmon canapes and tiny bite-sized bruschetta to visitors. 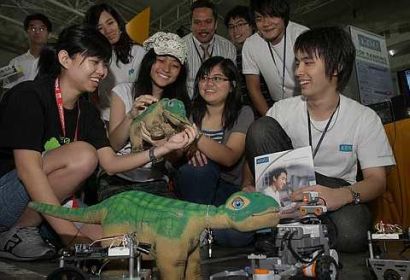 These robotic miniature dinosaurs are an instant hit with visitors to the two-day Star Education Fair 2009 in Penang.

Industry players from the robotics sector were also at hand to give advice to students and to showcase their latest products.

Among them were Pensonic's Pleo - a robotic baby dinosaur designed to respond to touch. 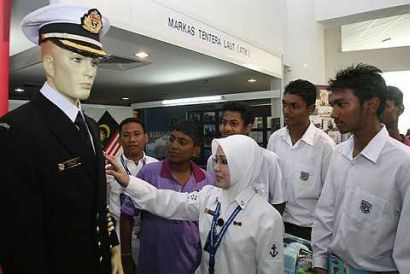 "A lot of the colleges come to our school every year to tell us about their programmes so although we haven't left school yet, we came to check things out. It's best to prepare early," said Khoo, a SMK Convent Light Street student who hopes to study computer forensics.

Outside the main arena, exhibitors on the concourse received a steady flow of visitors inquiring about tertiary programmes, scholarships and opportunities to study abroad.

Among the exhibitors was the Royal Malaysian Navy (RMN) who provided information on the life of marines.

"To be honest, it's a very exciting career. Those who choose a life in the navy get the opportunity to travel to all parts of the world," said RMN promotion and recruitment officer Mohd Khairunislah Ahmad.

The atmosphere was also buzzing at the Spin & Win contest where visitors and students tried their luck with cut-out entry forms from The Star.

Celcom and FireFly were the main sponsors of the contest.