Subang (11 Dec 2013) - Export-Import Bank of Malaysia Berhad (EXIM Bank) and Firefly, a wholly-owned subsidiary of Malaysia Airlines (MAS) today unveiled a new generation ATR 72-600 aircraft adorned in the striking colors of EXIM Bank. In EXIM Bank's corporate color red and blue, the livery features a serene and clear blue sky backdrop with a flock of birds flying in unison to symbolise its direction to traverse and transcend beyond new opportunities.

The aircraft livery project was materialized following the partnership between EXIM Bank and MAS recently on the Bank being the sole financier providing a bilateral facility to MAS for the purchase of eight (8) ATR 72-600 aircrafts worth of USD154.6 million. This investment will enable MAS to further expand its regional offer, adding new routes and frequencies to its global network 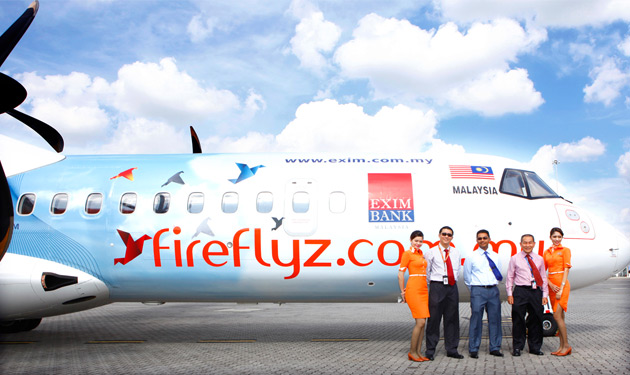 Speaking at the unveiling ceremony, Mr. Ignatius Ong, Chief Executive Officer of Firefly expressed his pleasure at being the airline to bear the EXIM Bank livery.

"EXIM Bank's livery represents what we are as an airline; committed, efficient and ethical, which are attributes of Firefly. Firefly and its strategic partners work together to offer the highest quality service, and convenience for every passenger's travel experience each time they fly with us. This strategic alliance between Firefly and EXIM Bank allows us to offer our passengers consistent service, regardless of their final destination," he added.

Echoing the sentiment is President/Chief Executive Officer of EXIM Bank, Dato' Adissadikin Ali who added, "Recognised as the preferred financial institution for cross-border ventures, EXIM Bank is a dynamic and innovative Bank. With this unique livery it will really make us stand out from the crowd, both in the sky and on the ground at airport all over the nation hence allowing EXIM Bank to take its brand to greater heights".

EXIM Bank Malaysia strives to facilitate Malaysia's global business by providing banking and credit insurance products, services and advisory. EXIM Bank marked another significant milestone as being awarded with the Most Watched Bank 2013 in Malaysia by InterContinental Finance Magazine (ICFM) United Kingdom in its Global Banking Awards 2013. Earlier this year, HR Asia also awarded EXIM Bank as the Best Company to Work for in Asia 2013.

The Export-Import Bank of Malaysia Berhad (EXIM Bank) was incorporated on 29 August 1995 and is wholly-owned by the Government of Malaysia. The Bank has assisted a diverse range of Malaysian business in an equally diverse range of sectors in their global ventures. EXIM Bank is taking pride in meeting its mandated role of stimulating and enhancing the competitiveness of Malaysian industries for exports and investments globally via the provisioning of internationally and domestically competitive banking and insurance products and advisory services.

Firefly, began operations in April 2007. Currently, it operates a fleet of 12 ATR 72-500 and 1 ATR 72-600 turboprop out of Penang and Subang, connecting secondary destinations within the Indonesia-Malaysia-Thailand Growth Triangle as well as providing air linkages between Malaysia and Singapore.

Firefly received numerous awards and recognition. The most recent was on April 24, 2012 when Firefly was accorded Putra Most Promising Brand of the Year by Putra Brand Awards. Five months prior to this, on November 15, 2011, Firefly was conferred "Superbrand" status. Other awards received include the 2010 Frost & Sullivan Value Airline of the Year award and the Green Initiative of the Year 2010 award by Leaders in Aviation in conjunction with the Doha Aviation Summit. Firefly is also recognised as the Best Brand in Aviation for the Brand Laureate. Firefly connects with the world through Facebook, Twitter and Instagram.

Malaysia Airlines describes its distinctive brand as an extension of the special culture of warmth and friendliness unique to Malaysians. This inimitable Malaysian sense of graciousness is branded as "Malaysian Hospitality" and symbolized by the acronym MH, which is also the airline's flight code.

Both Malaysia Airlines and its Kuala Lumpur hub are among the industry's most frequent winners of awards for quality service. Malaysia Airlines is a 5-star airline as rated by Skytrax and has won the 'World's Best Cabin Staff' award, also by Skytrax, in seven of the past 11 years. Malaysia Airlines also received the prestigious accolade of 'Best Airline Signature Dish' for its Satay, a traditional Malay savoury dish, served in the Business and First Class cabins.

In 2012, Malaysia Airlines welcomed the A380 into its fleet, signalling a series of improvements to its products and services as a premium carrier.

Malaysia Airlines is a member of the oneworld airline alliance. In addition to offering guests a wider network of over 800 destinations in more than 150 countries, frequent flyer members of Enrich (for Malaysia Airlines) stand to benefit with greater rewards and recognition.