He said the state government was prepared to make land available for such a facility.

“We will also appeal to the Transport Ministry to upgrade the existing airport to world standard.

“It is now functional but we need to be more than that,” he told newsmen after welcoming passengers on Firefly’s inaugural flight from Bandar Aceh in Indonesia to Penang on Sunday. 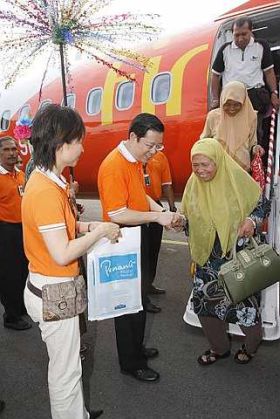 “By flying to Ho Chi Minh City, we can create new synergies in tourism and business. The city is one of the growth centres in the world.

“Firefly should have the foresight of flying there before other carriers beat it to that,” he added.

On the community terminal proposal, Firefly managing director Eddy Leong said as the airline grew, it would work with the Malaysian Airports Holdings Berhad (MAB) to improve on its services.

He also said Firefly was more focused on providing a feeder service to Penang while Malaysia Airlines took care of the long haul flights.

“Ho Chi Minh City was initially in our plan but we took it out. With the economic crisis, we have to look at the low hanging fruits first such as Sumatra and southern Thailand,” he added.