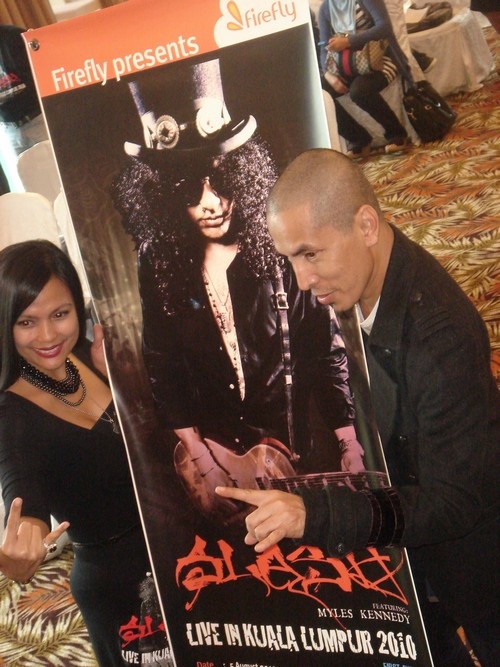 ALL you rocker fans out there, be prepared to get Slash-ed!

Not only has Firefly managed to enlist this amazing rock legend to perform here but the airline has also paired Slash from Guns & Roses with Malaysia’s own rock star — Amy Search will open for the Slash Live in Malaysia concert!

“It’s indeed a privilege for us to have Amy Search, our very own legendary rocker as the opening act of the Slash concert,” Angelina Fernandez, Head of Marketing & Communications, Firefly, said. “Amy’s fans transcend from the older generations from the 1970s to the younger ones. We want to ensure that all concert-goers have a rocking good time.”

The media had questioned Amy and his manager on the arrangements and as to why Amy’s band members from Search had not been included. “I want to do a follow up on my first solo performance after Istana Budaya so that is why the rest of Search are not involved,” Amy said.

He added: “I am speechless after being given this opportunity to open for Slash and there is no doubt that Slash is the sexiest guitarist in the world,” he adds.

VOIZE asked Fernandez about Firefly’s strategy in bringing international acts into Malaysia. Slash was chosen, she said, because of the large number of rock fans here. And with Slash’s reputation as a extraordinary guitarist, she added that Firely just couldn’t go wrong in their choice for their first concert.

Doors will open from as early as 6pm on August 5 at the Surf Beach at Sunway Lagoon Theme Park. The concert will begin at 7pm with a local flavour — fielding local young talents, including those from “Bintang Rock Hot FM” Search Showcase. This first session will be a competition, in search of young and amazing Malaysian bands to also be an opening act for the Slash concert.

After the showcase warm-up, Amy Search will come onstage for 40 minutes, performing some eight songs including his trademark Isabella, Mentari Merah Di Uluk Timur and Fenomena, followed by Slash, who will perform for an hour and a half. Slash will be belting out Sweet Child of Mine and November Rain with lead singer Myles Kennedy.