Of the 36 ordered, Firefly will take on 20 new aircraft whilst 16 will be inducted into the fleet of its sister company MASwings. 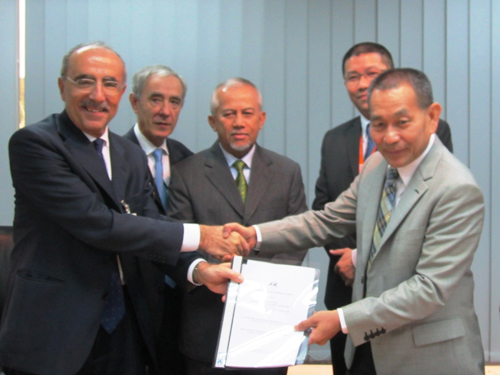 Firefly's CEO, Ignatius Ong said, "The brand new series of fleet will boast state-of-the art innovations with the latest glass cockpit technology similar to the A380 panels and most importantly, the cabin that is designed without compromising passenger comfort. While style may be the essence of most airlines' fleet enhancement, the comfort and safety features also are and always will be the key priorities in our choice of fleet."

"The turboprop is also reputed to be one of the most fuel efficient aircraft in existence, hence resulting in lower carbon emissions. This is favourably in line with Firefly’s value of being an environmental-friendly airline. The ATR is also superior in terms of the aircraft technological dynamics and its excellent economics for short hops of our network," Ong added.

The chief designer of the aircraft cabin is the renowned Italian designer Giugiaro whose work is seen in many luxury supercars such as Lamboghini and Maserati.

Currently Firefly operates with 12 ATR 72-500 while MASwings operates 10 similar aircraft. The additional enhanced series of ATR 72-600s, is expected to arrive gradually from the end of Q2 next year to complement the demand of Firefly’s services and support the network expansion plans of MASwings.

Ahmad Jauhari Yahya, the Group CEO of Malaysia Airlines said that Firefly is expected to rapidly grow within the next five years especially with the huge surge of trade movements within the domestic sectors especially with regions like Johor having the booming Iskandar projects and others such as Penang, Selangor, and Kota Bahru which are equally flourishing. Malaysia has good trade relations with the IMT-GT region and Singapore in which Firefly has prominently strengthen its network footprint. The additional aircraft will be utilised to continue growing Firefly’s network and providing customers with more travel options. Likewise, the new aircraft are timely for MASwings which has set its focus on expansion in the BIMP-EAGA region whilst also increasing travel comfort for domestic operations within East Malaysia.

"The new aircraft for MASwings fleet will be timely to provide more feeder traffic into the hubs of Kuching and Kota Kinabalu for onward connectivity to the jet destinations served by Malaysia Airlines. With better interior features and inflight comfort, we will not only grow to be the preferred community carrier in BIMP-EAGA region but also contribute to the profitability of the Malaysia Airlines group," said Dato' Nawawi.

Firefly, a wholly owned subsidiary of Malaysia Airlines, began operations in April 2007. Currently, it operates a fleet of 12 ATR 72-500 turboprop out of Penang and Subang, connecting secondary destinations within the Indonesia-Malaysia-Thailand Growth Triangle as well as providing air linkages between Malaysia and Singapore.

Firefly had also received numerous awards and recognition. The most recent was on November 15, 2011 when Firefly was conferred “Superbrand” status. In July 2011, Firefly’s Managing Director, Dato’ Eddy Leong had been honoured for his outstanding leadership qualities and was awarded the Global Leadership Awards for Community Airline Sector.